A look at Sunflowers and their Natural Dye properties

Written by [email protected] on March 24, 2007 in Natural Dye Plants

Sunflowers have been used for centuries, if not millennium by the Hopi Indians to dye a range of reds, purples and blues. This summer has been especially good for growing sunflowers anywhere in Europe.

These de-flowered seed heads below are a variety called Van Gogh. As you can see the wonderful whirl of seeds are purple when young, turning to purply black as they mature. Although all the seeds I sowed looked the same, some plants have grown with several flower heads to each plant these having the purple natural dye producing seeds shown below. 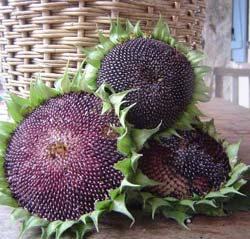 However some are giant one headed monsters with a yellow ray of petals, while the many headed sunflowers have yellow petals tinged with purple in the inside.

I suspect the seeds of these, which are not as yet mature will eventually be a different colour to those above. This is due to the mother plant from which the seeds originated being cross pollinated with common or garden sunflowers which are everywhere in France.

Alas I have a field of sunflowers less than a kilometre away from my garden so the cross pollination will have continued, aided by bees and hornets, which particularly seem to favour sunflowers. Next year I will once again have a mixed crop, some which can be used for natural dyeing and some which are just to be admired.

I'd like to know how to use hopi sunflower seeds to dye. Ann from Argentina.

If I understand your comment regarding sunflower crop, the Hopi sunflower could be "contaminated" by another common sunflower. Right?

Also, to follow up on Ann from Argentina, how does one extract the dye from the seeds? With plain water or denatured alcool? Navajo lady told us that she soaks her seeds in water. I did not get a chance to ask her more details.

The blue is extracted from the sunflower seed by boiling them for an hour in water and then using on mordanted yarn. However the dye produced seems to vary from year to year. I think the more sun and less water the sunflower has the bluer dye you will get.

It might also vary with the type of soil. Soaking might also help but keep an eye on the liquor and if it starts changing from blue to brown use it straight away. I hope this has helped.

I just love hearing about such cool techniques. I hope you can share your website and experiences with some of our members on Craft-cycle. We try to encourage others to do natural crafting and share their talents. I love reading your site. Cher

These are absolutely perfect for my sister's wedding bouquets. Where can I find this seed???

Hi,
We have a dye bed at our garden in London and I'd love to grow these sunflowers. Do you know where I can get seeds?