Two more wonderful samplers from the creative needle of Irene Dunn, here described in her own words.

"The sampler which I made for Marguerite and Malcolm I think is rather similar to the one I made for you, which can be viewed in the gallery on the main Renaissance web-site. Many of the patterns are similar but the wording comes from COLBY Averil-Samplers (published in the 1960's)" 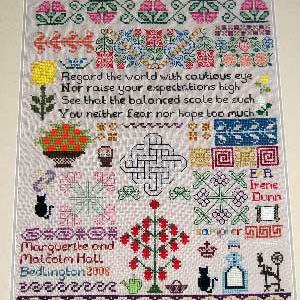 "The unframed sampler I am very pleased with. It is a 'band sampler', very popular in the 16-17th centuries. Called a band sampler as the patterns are worked across.

The needlewoman would embroider a pattern and then roll the work up until a new pattern took her fancy.

The patterns I worked are from samplers in the V&A and in the Fitzwilliam Museum in Cambridge. I actually worked out some of the motifs myself." 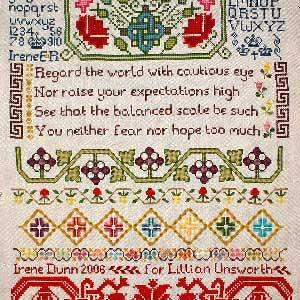 Any comments on this post will be forwarded to Irene. Do you have samplers worked with Renaissance naturally dyed wool to add to this file?

Wow! This is just wonderful work. I wish I had the patience for such fine needlework myself... :-)