Woad/Pastel, grown for dyeing in the Ariège, France

Written by [email protected] on March 24, 2007 in Natural Dye Plants

This is a single woad plant (pastel in french) flowering in my garden here in the Ariège. Strange is it not that a plant that dyes so blue should have such yellow flowers? I have removed nearly all the other plants as I do not know how invasive it is, but this one I will let go to seed, to sow in August for plants for next year.

Near Pamiers on the road to Pujols there was a field of woad/pastel that has just been harvested as the seeds were ripening. A whole field of purple teardrops which are now on their way to the pharmaceutical industry. For natural dyeing the plants are cut when the leaves are ripe, from June through to September. 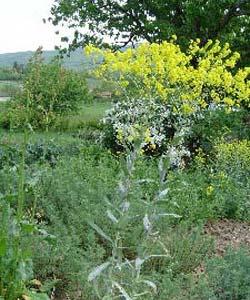 We sell woad pigment in 25g packs that was processed from woad grown in the Ariège on our woad pages.

In times gone by whole families and groups of people would set up temporary home in makeshift huts for a year or two to grow and tend a woad crop.They would clear and prepare the ground, plant and hoe the crop, the hoeing being of the utmost importance as weed and dirt can greatly effect the dyeing process, Then, when the leaves were ready, showing the tell-tale hint of blue on the leaf tips they would begin the summer's harvesting. Carefully picking by hand so that all unwanted plant and animal matter was removed.

When the land was exhausted they would move on to the next available space. European nomads. I wonder how they manage this kind of intensive work in the modern age?

In those days it was mainly used for natural dyeing although the pigment was also used to paint wood and cow horns, protecting both from the ravages of unwanted insects.