It has been a while since the last blog post and much wool has passed through the dye vats since then, with just a month to go to the Knitnation 2010 expo I thought I had better let you know what was going on in the dye house.

Although our main product is still the embroidery threads, knitting has been occupying Tee and me for quite a while now as we dye and wind the wool for the kits the designers are finalising for Knitnation. Tee is a whirlwind of efficiency as she winds piles of precisely weighed hanks to go in the various kits, many of which have the same colours in them. I am already lost amid the growing complexity and just obediently dye what I am told we need. Lots of Woad!

At the same time the designers are sending in their finished patterns each one received gratefully with a gasp of amazement at what they have achieved in such a short time.

The arrangement with the designers is that the pattern copyrights will belong to them and that for each kit sold they will receive the full amount of the money paid for their pattern, so that way it is a kind of unofficial designer / dyer co-operative which we hope will work well to promote all our work.

There is so much to say about each designer and her pattern that I will cover one each in the next four blogposts leading up to Knitnation.

Katri Parovuori from Finland has put the finishing touches to her three moebius shrug designs each worked with toning sheds 250 m hanks of our Lace-weight Merino If you are a member of Ravelry they can be seen on her (Katri63) Ravelry page where they have already created quite a stir. In order of conception they are Saraste Shrug inspired by the story of the plight of the Finnish fairy princess Saraste, who's name means the first rays of the morning sun. The three glowing oranges of this beautifully designed shrug pictured below reflect the colours of the dawn sky. 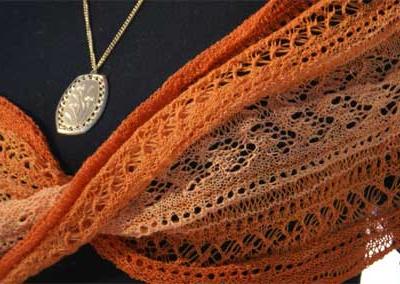 Saraste was test knitted in three toning purple by Kate Wallace the New Zealand designer (blodeueddon Ravelry). This shrug now hangs in my work room and is viewed by visitors with growing wonder as they examine the intricacies of the pattern, the milliard ways to wear it and try to find its end!

Next off the needles or design pad was Illusia also named after a Finnish fairy princess, the four greens in this shrug recreate the atmosphere of the forests in which she, Illusia, made her home. 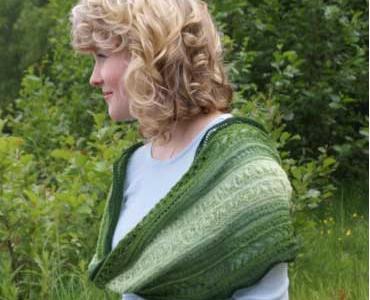 Maahinen is the last in this trilogy, it is created in misty browns. Maahinen is a member of the Earth people in the old Finnish mythology and the shrug conjures up this misty illusive world. 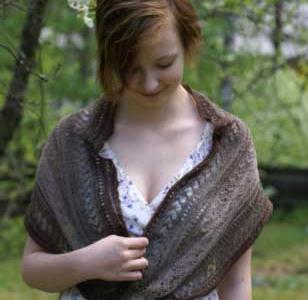 All three shrug designs have the Nordic air of something magic just caught out of the corner of your eye, a celebration of earth, sun and the growth forces that are so strong in this mysterious land. A fairy knitting adventure.

Katri's Paatsama socks kit will also be available at the same time. This sock design worked in our Organic Poll Dorset 4 ply is inspired by the buckthorn leaves and dyes abundant in Finland. On the dark, almost navy, indigo background the two tone leaves look stunning.

All the kits will be launched at Knitnation on July 29th and simultaneously through a special designers' kits page on the Renaissance Dyeing web-site.

Katri had this to say about her own design adventure.

"Andie, I have enjoyed this exercise immensely. I had never written instructions or made charts before, this has given me confidence that I can do it. And your yarns and colours have been really inspiring! I envy you for being able to work within such an aesthetically fulfilling craft. If you ever need a summer temp, please consider me!"

I most certainly will Katri, the pleasure will be mine.

We have just come to the end of the first natural dyeing workshop of the year, this one covered felting and dyeing with natural dye extracts. although we did have a trip to the dye garden and harvested the first batch of woad which although still meager produced some lovely dark blues. We were expertly catered for by Tee who is a super cook and who looked after us all so attentively.

The next workshop "The Secrets of the Dye Garden" still has a few places left and will concentrate entirely on fresh dye plants, woad, weld and madder among them as well as some very useful weeds. Lets hope it stops raining before then!

With all this knitting around, we still haven't forgotten the embroiderers and would like to offer them a summer treat in the form of two free extra greens added to the Elizabethan Range during the summer months of June, July and August. Like the rest of the range these greens are dyed with dyes available in 16th century Europe. Of course this set can also be used by knitters!