For those of you inspired to get out your needlework by the work of the Staircase Stitchers mentioned in the last newsletter, you might like to look further for inspiration and guidance from Mary Corbet, that great ambassadress of fine needlework. Mary writes a daily blog on her site: www.needlenthread.com where she shares her vast experience in all types of embroidery. There you will find over 50 video stitch tutorials, a tips and techniques section - take a look at this church embroidery project, a large selection of free hand embroidery patterns, a section on embroidery books and one on pictures of embroidery from embroidery for children to Whitework.

Mary Lena has designed the Urban Troubadour Cowl an original garment that is causing quite a stir. If you would like to catch up with more of Mary-Lena's work she has a blog full of all kinds of goodies which you can find here on her blog.

She has this to say about designing Urban Troubadour. â€œI wanted to make a capelet (capuchon in French) because it was the most common garment of the middle ages and because the colours I used were dyed with the same plants as they would have been then. The name of the yarn "troubadour" inspired me to make a troubadour hood and I wanted it to be possible for it to be worn by both sexes as it was in the middle ages so I have designed it in two colourways. 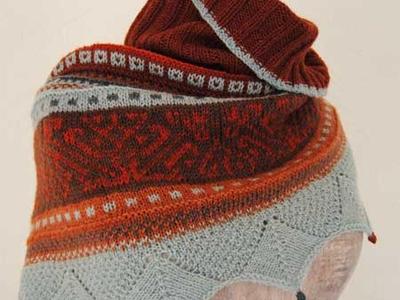 Either of the Urban Troubadours can be knitted in 3 sizes by changing the needle size.

I came across Mary-Lena when I discovered that she had used my main crewel range pack to crochet this fetching shawl. It contains 75 naturally dyed colours of fine-lace weight yarn. The picture doesn't do justice to it, the drape is like a caress. 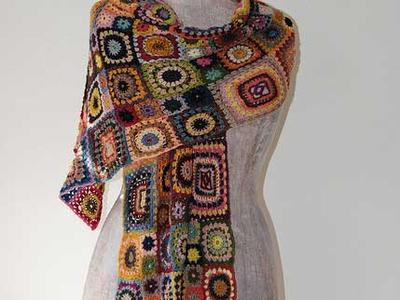 Urban Toubadour is knitted in the new organic yarn which in its development slowly grew itself a character, and became the Troubadour range.

Here, where we live in the foothills of the French Pyrenees our local history is not lacking in troubadours, shepherds, cathar castles and fair maidens, some of whom have won a place in my heart and these have crept into my thoughts while working.

The first was Ermengard of Narbonne a lady who lived in the 12th century, ruling her land with courage and wisdom, the first female diplomat. She led me to the troubadours who would have frequented the local courts, heralding the advent of courtly love, bringing to everyday consciousness ideas of fidelity, respect and trust. Among the tales of Cathars that lace the modern tourist trade, there is one of Pierre Maury, whom I have grown to admire from across the centuries. A sturdy, courageous, gentle herder of sheep, who used his knowledge of the mountain paths to lead more than his flock to safety, out of the clutches of the Inquisition. 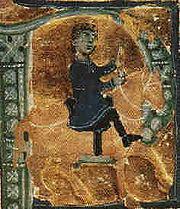 As these characters swirled around my mind I naturally also thought of what colours they would have worn, which dyes would have been available to them. They would have had easy access to the three primary colours; blue in the form of woad and exotic indigo bearing plants from the Near East and Africa and red provided by wild madder which is still even now a weed in the local pastures turning the hillsides white in the spring with its feathery blossom. Yellow could have come from weld which can be seen growing wild in this calciferous region or from goldenrod which grows in abundance in the margins of fields or any of the many yellow dye bearing plants. With these three colours and oak bark and galls the mediaeval pallet would have been extensive. 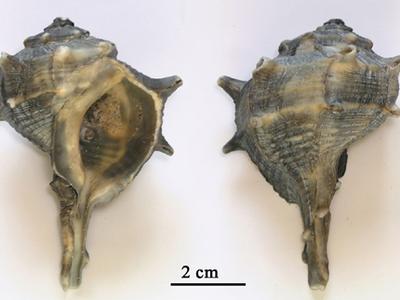 Purple has for millennium been the privilege of kings and emperors, sometimes reserved exclusively for them on pain of death. There were many reasons for this, one being the difficulty with which the colour was dyed. Tyrian purple was dyed with the Murex shell fish and was very expensive even 2000 years ago. Today you can still buy it at a mere €2,439 per gram.. that is roughly a hundred times the price of gold!

Needless to say I don't use murex and I don't suppose they would have done in 12th century Langued'oc either, they would have used kermis together with woad or indigo for their rich crimsons and purples. Tiny insects not unlike cochineal that lived on the stunted oaks of Catalonia, both in France and in Spain.

I have heard tell that you can still find kermis in the Languedoc if you know where to look, but they must be rare and I haven't looked although I am planning a trip over there soon, so stay tuned! Instead I have used cochineal, its 'modern' replacement from the New World. So I crave your pardon and hope that you enjoy donning the crimsons and royal purples all the same.

Saw and loved the Bohemian Rhapsody Shrug at Knit Nation in London. Can't wait for the pattern to be available for purchase - I got the wool for the very purpose! Any news on availability date?