Story of a sweater

The stunning Lady and the Unicorn tapestries at the Musee de Cluny in Paris were created in about 1500 using wool and natural dyes such as madder, woad and weld. They are believed to represent the five senses. Each one features a lady and her maidservant, a unicorn, a lion and numerous small birds and animals, as well as trees and plants. The background colour is red, dyed with madder, which has not noticeably faded in all the five hundred varied years since the tapestries were woven. This is a remarkable testament to the durability of natural dyes. Sections of the tapestries rewoven in the 19th century, using wool dyed with modern chemical dyes, have faded badly. 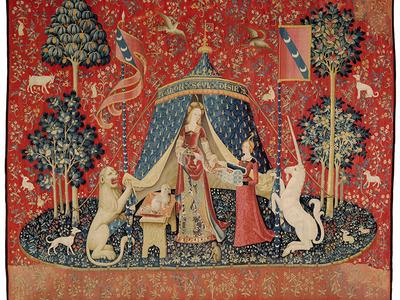 This tapestry inspired Australian vintage designer Kate Wallace to design a sweater that would bring out the colours and atmosphere of the original tapestries that she so admires.

We worked together sorting out the colours and the dyes used in the original tapestry and I tried to dye the wool as near as possible to the 16th century original colours.

The red which we have nicknamed Unicorn Red is dyed with a super saturation of madder. My madder comes from Bangladesh but in the 16th century they probably got their's from Zeeland in Holland which was the European madder growing region. 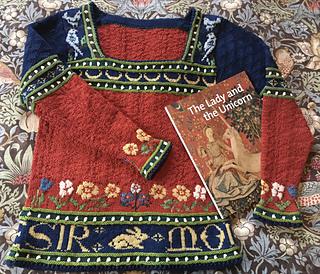 The dark blues were probably originally dyed with woad, the skill of the early 16th century dyers in doing that left me reeling. Woad although it contains the exact same dye pigment as Indigofera is about 8 times weaker so to reach this depth of blue would have taken them about a week of dipping. Which might be why it has lasted so long. I myself took over a day using the much stronger Indian Indigofera tinctoria. The pale blue is dyed with woad.

The yellow is a pure weld dyed at a certain temperature to bring out golden tints. The greens are dyed first with weld and then over dyed with indigo or woad. The brown also uses indigo, this time on top of madder. 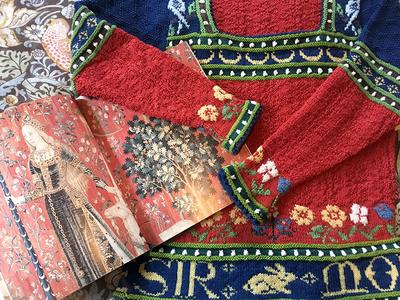 A truly satisfying adventure into the skill of 16th century craftsmen both in dyeing and design and tapestry. An enchantingly unique sweater and designer. Thank you Kate for taking the initiative for this stunning project. 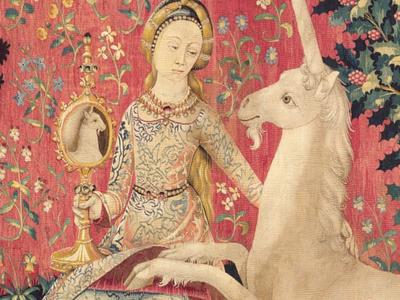 Wow! A stunning work, really. I truly adore the Lady and the Unicorn tapestries, that I've seen at Musée de Cluny, and the sweater reflect the spirit of these masterpieces. Your dying work is also remarkable, and specially adapted to this work. Great result, congratulation to you and Kate Wallace. You are both artists.

Thank you so much Helene , coming from you that is praise indeed!

i just want to note that the "modern chemical dyes" that have faded badly are not in fact the modern and very stable chemical dyes we use today. Lest people think that natural dyes are more stable than synthetic, they are not. The faded repairs to these tapestries were not done in modern times. The sweater and the tribute to the Lady and the Unicorn are stunning and amazing. I'll be sharing this post! It is a gorgeous project and the natural dyeing done to make the colors is wonderful