When we first moved to the Ariége in France we were lucky enough to have as our neighbour Madame G. Approaching her ninetieth year she wasn't too happy at first to receive these strangers as neighbours but we were nearly as wise as she was and knew that if we wanted to know and grow in this totally new area we simply needed to ask Madame G how she did it. Different climate, soil and even weeds would have floored us without her deep knowledge and aid. We lived happily together for nearly 10 more years before she parted for a higher garden. 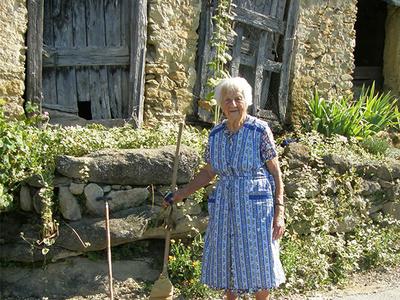 Here she is in her early 90s beside a garden she had made outside an old ruin in the village. She planted and tended flowers wherever she could.

One day I asked her how much land she needed to grow the oaks to keep her cuisiniere going in the winter, to heat her house and cook. She paced out an area on the road, (where it was the custom to converse), 'Voila' she bellowed, 'times 20 of course.' For it takes twenty years for the trees to re-grow. The people living in the Pyrenees have known this for centuries, sustainable is not a new word or practice for them.

When we moved to where we are now we had a cuisiniere put in. We cook and heat the house with it in the winter, just like Madame G did. We don't have our own oak woodland like she had but she put us in the way of a good woodman who supplies well seasoned wood and doesn't over cut his plantation. 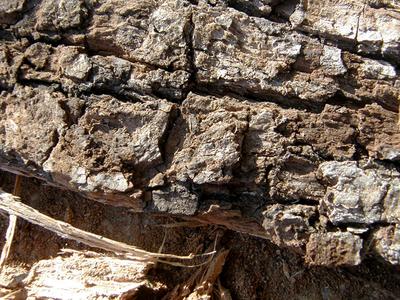 Over the years I have learnt a lot about oak bark which I use for dyeing the lighter browns. The first thing I learnt was that its colour-giving is totally unpredictable. You can't even tell by the colour of the bark what colour you will end up with. It can vary from one tree to the next, even from one part of a log to the next. The position of the tree matters a lot, whether it has enough shade or light, the soil, the base rock, the weather over the past year. The insect life in the bark! 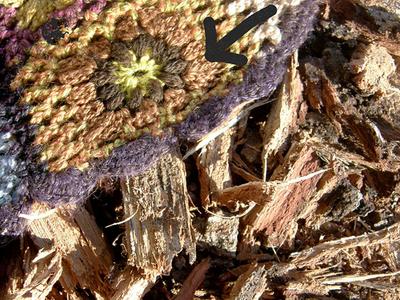 I was quite hopeful of this batch below, some larvae had been in it turning the inner bark (phloem) a reddish brown. I bash the bark with a fair sized hammer, this works fine to reduce its size. Then I soak and stew, soak and stew until the liquor is of a pleasing colour before I dye the mordanted wool in it. 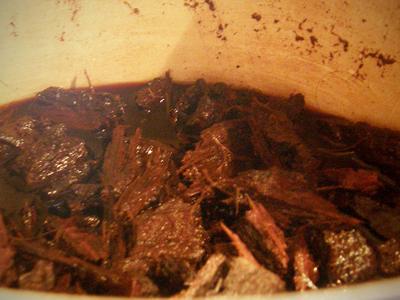 The results on our lace-weight crewel wool of a long but satisfying process. 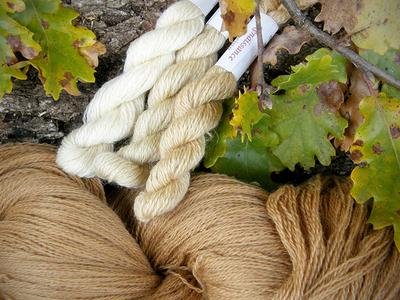 Good afternoon from the West of Ireland, , thank you for the lovely article about Madame G and her oaks. I have quite a few hand loomed Metis sheets and would like to dye one for a throw, a deepish olive green comes to mind, and perhaps some simple wool embroidery in colours such as Victoria plum, avocado, And a few others, is your oak dye dark or light? I would appreciate your advice and information about dyes that you sell..if that is the case.
Hope you are safe and well, kind regards Helen Moreau