The light-fastness of natural dyes

In 1930, Violetta Thurston wrote the following as an introduction to her pioneering booklet "The Use of Vegetable Dyes".

Q. Is this "vegetable dyeing" we hear so much about less trouble than chemical dyeing?
A. No. it is more trouble.
Q. Is it, then quicker?
A. No, it takes much longer.
Q. Is it a faster dye?
A. No, a really fast chemical dye cannot be surpassed by any vegetable dye.
Q. Is it cheaper?
A. No, the cheap chemical dyes in packets cost only a few pence.
Q. Why then does anyone trouble to use vegetable dye?
A. Because of the beauty of its results!

Those who use them claim that no chemical dye has that lustre, that under-glow of rich colour, that delicious aromatic smell, that soft light and shadow that give so much pleasure to the eye. These colours are alive as all beauty is alive; and that is why we would like every craft worker in general, and every weaver and embroiderer in particular, to learn something of vegetable dyeing. 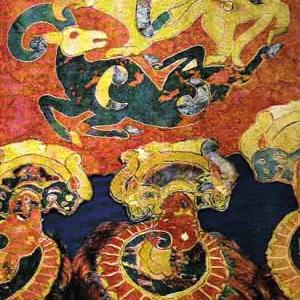 The picture above is of a saddle cloth made from felt inlaid with leather and horsehair. It is 3000 years old, and the colours are still fresh. This is a bit of a cheat, as it was kept in a frozen tomb for most of that time, but not all. 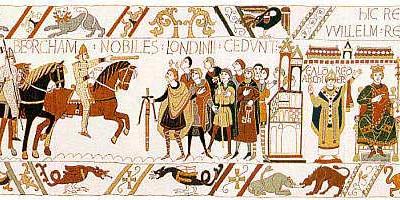 The picture above is of the Bayeux Tapestry, admittedly this is much newer than the above, dating from about 1070. It is also a bit of a cheat, as it has spent much of its long life in storage when it was not being used as a wagon cover.

It has been said of the Lady and the Unicorn Tapestries that they are among the most beautiful art treasures of the world. They were woven c1500, probably in the workshops of Flanders, in the medieval style of mille fleurs, a thousand flowers. Beautiful, isn't it? Yet if you look closely, you will notice that there is no green, this is because the yellow has faded from behind the blue, this however, doesn't seem to detract from its beauty. 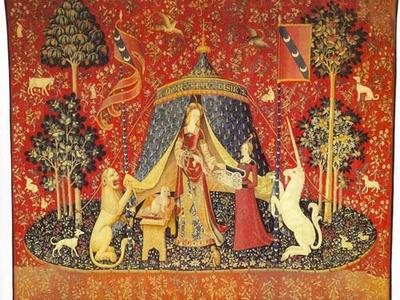 The shades dyed at Renaissance Dyeing are good light-fast, most of them are medium to strong colours which do not fade any more rapidly than most chemical dyes. Have a look around your house at chemically dyed textiles which are near sunny windows.

If displaying fibres and textiles over a long period whether naturally or chemically dyed, we advise that you avoid strong sunlight and fluorescent lighting both of which emit quite high levels of ultraviolet light which is particularly damaging. Incandescent lighting is probably the best with a level of less than 50 lux.

Our 2/24 crewel / lace wool and sock wool are both superwash and will go in a machine wool wash at 40ºC or you can wash by hand. Always wash naturally dyed wool separately.

Some dyes such as cochineal, indigo and logwood may leave residues on your hands while working, these will not harm you. Washing your hands in soapy water will remove the dye.