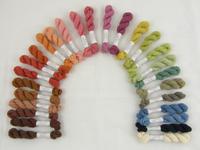 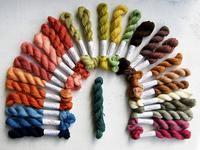 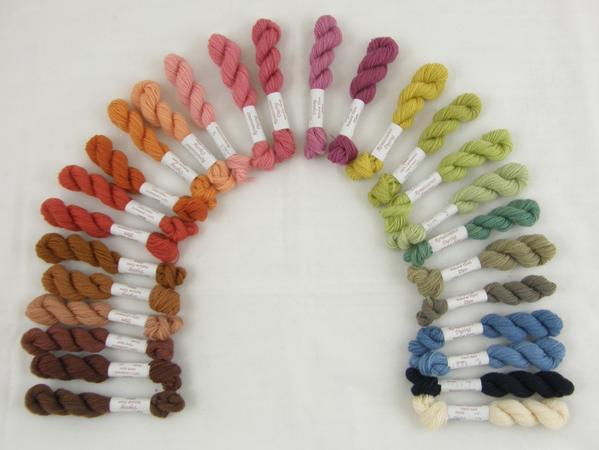 Dyeing in the 16th Century

Until the reign of Henry VIII, Roche or Papal alum had been used as the principle mordant in natural dyeing, due to political turbulence the alum supply through-out Europe was severely disrupted. It was not until the last half of the 17th century that supply once more became dependable due to England's self-sufficiency in alum. Iron sulphate, known at that time as Green Copperas or Green Vitriol was used extensively in the natural dyeing process, not only as a mordant but chiefly to 'sadden' the colours. For example Nutmeg (0909) is 'saddened' Marigold (1365).For the Elizabethan dyer sourcing dye materials was not as easy as we find it today.

Bearing in mind that Elizabeth the First passed a law forbidding all dyers to come within 5 miles of her property whether she was in residence or not, we decided to forgo the use of urine in our woad vat! In producing this new 16th century naturally hand dyed wool range we have used the dyes available to the Elizabethan dyer of some standing. These were predominantly madder, weld, woad, indigo, cochineal, fustic, brazilwood, and cutch. Many of the colours are produced using combination of the dyes, e.g. Zinzolin (1708) is first dyed with cochineal and then over-dyed with woad. Cochineal was a new dye imported by the Spanish from their new territory of Mexico, it was expensive and only for the rich.

Madder (Rubia Tinctorum) was a more accessible natural dye, the best being imported mainly from the clayey soils of Zeeland in Holland. With the dyer's skill it was used to produce a whole spectrum of reds from pale pink through coral and light red to brick red, rust and a rich brown. The difference between one shade and another could be achieved by raising the temperature of the dye vat a few degrees. We use electricity and a thermometer whereas the Elizabethan dyer would have used wood and a combination of his senses of sight, smell and touch, sometimes of his foot!

Although indigo was beginning to appear in the Elizabethan dye houses, woad (Isatis tinctoria) would still at this time have been extensively used in the natural dyeing process. It was grown on a commercial scale in England notably in Lincolnshire. Woad needed for darker shades was imported from the warmer climes of Gascony and Aquitaine in France, which is where we get ours! See www.bleu-de-lectoure.com for every shade of woad.

Weld (Reseda luteola) was and still is a native natural dye plant, producing a clear light-fast yellow. Like woad and most other dye plants the strength of the dye is dependent on where it is grown and when it is cut. In the 16th. and 17th. centuries weld was cultivated on the chalky soil of Kent.

Fustic (Chlorophora tinctoria) was also a new import from the West Indies and the tropical Americas, the chippings of its wood producing a softer yellow dye to that of weld. Browns and grays were produced using a variety and combination of natural dyes such as madder, weld, cutch, oak bark and oak galls, nearly all over-dyed and then saddened with copperas.

We have named the crewel hand embroidery thread where possible as they would have been called in the time of Elizabeth the First. Azure and Blue Regue being but 2 of the 15 woad blues produced at the time. We have spared you the dubious honour of producing your hand dyed wool or embroidery thread work in colours such as 'puke', 'dead Spaniard' and 'goose-turd-green'.