Harvesting the Madder in the Natural Dye Garden

After four years of tending and weeding, the time has finally arrived to harvest the first madder root from the dye garden. Due to the wet autumn it has been difficult to judge the right time to harvest, as the foliage is still green and there are new root shoots. However the arrival of my brother-in-law on holiday heralded that the time was ripe, and with his help we harvested the madder patch.

Each day we dug out a few kilos of madder roots and he washed them before drying. As the week went on he perfected a washing method which involved rotating his hand like an old-fashioned washing machine. Finally all was out of the earth, washed and hanging to dry in the barn. Thank you Jan Kees!

Some of the roots we chopped before drying but the majority was left whole, time will tell which method might prove to be best. 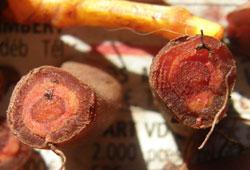 On the right you can see a cross-section of a fresh madder root. You can clearly see the three different layers of the madder root, which hold the secret to good madder dyeing.

I enjoyed your all-too-brief appearance on the BBC. I wonder whether very much more was filmed than was actually shown? I've done this sort of thing several times & was always disappointed with the results of editing, which seemed to distort so much. Now to the topic of madder:

I've tried drying madder before chopping it up &amp; also chopping it first. Whatever one does, madder is one of the more difficult dyestuffs to chop or cut up, as it's so fibrous. One advantage of drying it first is that the thinner roots can be broken up by simply snapping them. I wonder if they would respond to my method of processing & storing rhubarb root, which is similarly fibrous? I usually wash the rhubarb root well, then reduce it into pieces that will fit into freezer bags. I put a useful quantity into each freezer bag (say 200gms, for example), then store the root in the freezer until I want to use it. It breaks up very easily when it comes out of the freezer, as the freezing process breaks down the fibres. I've never tried this with madder, so I don't know whether or how it would affect the dye colour. Perhaps I'll try it when I next dig up some madder.