Here is a little project using just two natural dye extracts: Logwood and Persian Berries and the 100g of Australian pre-mordanted merino wool, from the Felters and Spinners Kit. 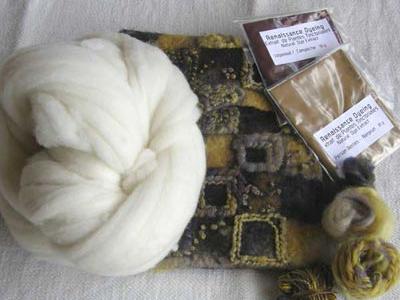 Purple and yellow are complimentary colours so you can't go much wrong really and the different tones and shades naturally produced by natural dyes bring variety and originality.

The bag was first felted and washed, a little local mica and silk gauze were incorporated into the felt to give texture. The bag was then printed with a pattern using the two dyes mixed with a little gum tragacanth. At the same time the remaining pre-mordanted tops and a little silk thread were painted with different variations of the two dyes and all were fixed by steaming. The tops were spun into embroidery thread and plyed to give strength and many different variations of shade. Some was Navajo plyed which later lead to interesting stitch form and texture. 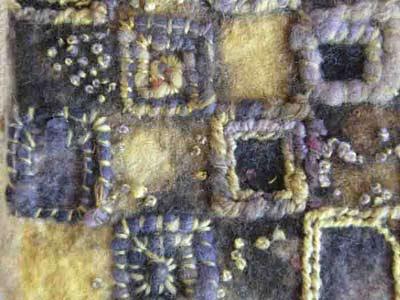 The bag was then embroidered using just two stitches: couching and french knots. The couching was even started and finished off using french knots. 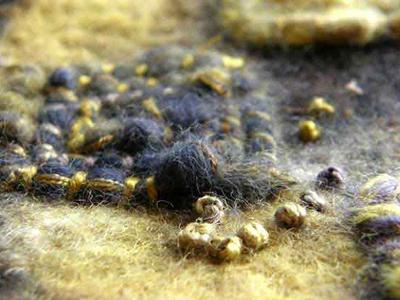 A cord handle was made out of the remaining spun tops and a smaller cord to bind the opening of the bag. A little square felt button was used to fasten the flap. 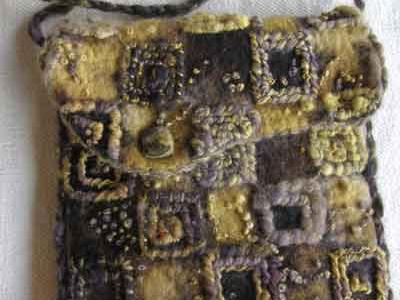 Your work is wonderful. I have recently begun the exciting discovery of working with these gyes too.

Am I right in thinking you were once in Ambleston in Pembrokeshire? We looked for you again and found that you had gone :(