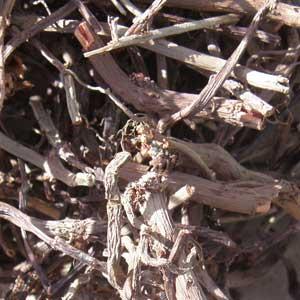 I have saved this home grown madder for this Autumn's sock collection not only because I have heard that madder needs to mature for a year but also I thought that Jan Kees deserves a pair of madder dyed handed knitted socks after all the hard digging and washing he did last year.

So to start with I soaked the madder roots for a few days until it was back to its rubbery but not very snapable original state.

Bearing in mind that many of you will not have a heavy duty Hobart sausage mixer I opted to reduce the roots to smaller bits in my blender. It is quite a big blender and managed the load reasonably well with the goblet half full of roots with lots of the soaking water added. I would not recommend that you use a household blender for this purpose as the white plastic on my blender was red at the end of the processing which is a good sign as far as alizarin content is concerned but might not be too good for the banana smoothie drinkers.

The slightly blurred image below is of some chopped madder on the side of a metal bowl. 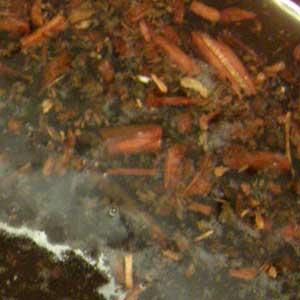 I have used some of the madder, 1.6 kilos to be precise for Brique and Tuile not to mention Rudbeckia which is madder with an indigo after bath Although I did all the magic madder tricks that you could learn about if you came on my August Plant Dyeing workshop, I didn't get the bright red I expected, although it is not far off and I love these madder shades with a touch of terracotta. This was simply because the madder was not ground fine enough.

I have kept it in a bucket, sodden but still winking hidden flashes of red up at me. I intend in a quiet moment to put it through good old Hobart and re-use it.... thoughts of a madder compost dye spring to mind, a redder blog post will soon follow.