The madder in question had already been used to dye over one and a half times its weight, however because the madder was quite coarsely chopped I could see both from the wool dyed and the madder that was left over that the red pigments had not yet been fully released from the roots.

The red wool below was soaked in a bucket of the moistened madder for a few weeks on our sunny doorstep, it was turned occasionally. It has resulted in a variegated yarn which in real life have some brilliant flashes of bright red. 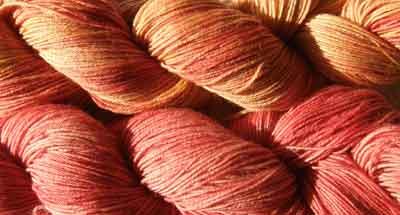 The yellow and red sock yarn was given a similar treatment in a bucket of 'spent' weld and madder.

I am not yet quite ready to to say goodbye to this madder that took so long to grow and prepare, so it is once more on the doorstep playing host to a few hundred grams of merino rovings. After which we will see if it is ready for the compost heap and hence back to the dye garden.

I just found you site. I knit socks and I am so excited by your products. This yarn is wonderful.