We wish you all a happy, creative and colourful 2011.

I hope that you have not had too much snow and that if you have you have had enough wool to see you through it! If not you still have time to snatch some of our January offer, which is 20% off the Blue-faced Leicester collection. The discount code is BFL (in upper case).

Our year ahead is looking interesting, the first outing will be Isend 2011 just after Easter. Adriaan and me will be taking a stall and I will be doing a demonstration of surface dyeing of felt with natural dyes. We are very much looking forward to meeting other natural dyers from around the world and the excitement is already mounting. We will be taking our usual wall of colour plus sock and embroidery wool and a few new exciting kits, such as Kate Wallace's Hall of Fire Tam, pictured here, together with our existing kit range. 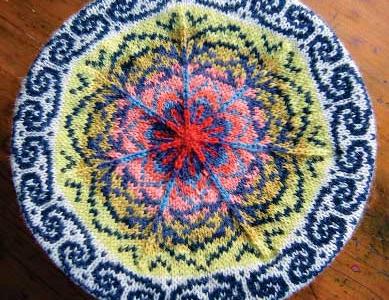 This year I will also be giving two 5 day workshops one in June on Natural Dye Extracts and the second, working with plants from the garden, in August. Bookings are already coming in so if you really want to be sure of a place don't wait too long.

In July, Adriaan and me will be wending our way to Knitnation in London, Simon and me had such fun last year it is going to be an annul must from now on, a chance to catch up with some of you and for you to catch up with us. More on this later in the year.

We try to keep our dyes as local as possible, some even come from our own garden, but the more exotic ones naturally come from afar, these are the indigo from India and the cochineal that comes from Peru.

Many small cochineal farmers in Latin America have been pressurised to keep their prices low by the big companies.. does this sound familiar.. and so they have stopped producing what for them is a very labour intensive commodity. This has resulted in scarcity of cochineal and a 6 fold price increase in 2010. It is thought that it is going to be a few years before the small producers can fill the gap again. One hopes that someone out there is protecting their interests and that the price will not once more drop to a level that is too low. Perhaps these are things that can have an airing at ISEND.

In the meanwhile I will have to put a small increase on the price of wools dyed with cochineal as the 2010 supplies run out. This will be the reds, pinks and purples as well as the cochineal dye extract.

And last but not at all least is the news that Tee has had a baby boy, Jacques. He is pictured here modelling a hat knitted with madder dyed Blue-faced Leicester and wrapped in a Dorset Poll blanket! 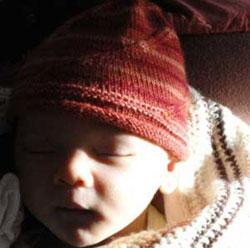 He was born on 7th. January and mother and baby are doing fine. Tee has been on maternity leave for a while already and her place has been valiantly filled by Adriaan, my hubby, who not only does the winding but also the washing, what a hero!

With Simon, our son and the proud new father, concentrating more and more on the web-site, not only is our family growing but also the family business!

Oh yeah, and I nearly forgot you can follow our nearly daily doings on Twitter and also on Facebok as Renaissance Dyeing

Congratulations! What a cutie
Sounds like you guys are up for some fun this summer
Enjoy