Information on natural dye plants from Europe and abroad.

There are many differnt ways of solar dyeing. Here is my particular Whit Sunday version:

Indulge in a vide greniers or car-boot sale. There you will find that the world is indeed full of many tongues and that it is communicative, kind and friendly. 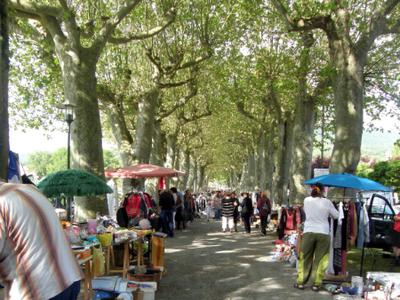 Beetle home with your chosen bottling jars, these are 1.5l. The rubber seals are important as ...

Happenings around the Dye House

Just to give you a peek of what is going on in the dyehouse.

There are three things on-going at the moment - dyeing for the new 10 coloured Shawlette from Cécile Balladino aka Eclectic Gipsyland; dyeing of some turkey-work wool for a project that has spanned 5 years for the Merchant's House in Marlborough, England and the endless job of keeping the crewel wool stock at a level that doesn't cause panic. Lampion is one of the Poll Dorset shades that will go into Cécile's new crochet shawl, this is made, among other things, with onion skins ...

A Look at the Natural Dye Garden in May

A quick look at the dye garden on a dry May day. It hasn't rained here for weeks. The Cosmos and Coreopsis are waiting to be planted out, they are big enough already but with no rain in sight. I don't want to risk losing them.

The mass of fluffy foliage in the image below is the two woad plants I left to go to seed when I took the rest out earlier in the spring, the yellow flowers are almost gone and the tear-drop seeds are still this light fresh green that would look spectacular on a ...

The madder in question had already been used to dye over one and a half times its weight, however because the madder was quite coarsely chopped I could see both from the wool dyed and the madder that was left over that the red pigments had not yet been fully ...

I have saved this home grown madder for this Autumn's sock collection not only because I have heard that madder needs to mature for a year but also I thought that Jan ...

The humble onion skin can be very versatile when it comes to natural dyeing, producing with a good alum mordant and modifiers a wide range of yellows, oranges and browns.

Living in France, it is easy to collect onion skins with the help of my neighbours, I have a good supply of organic onion skins to keep me going all year round. I just keep them in a paper sack in a dry place until needed. 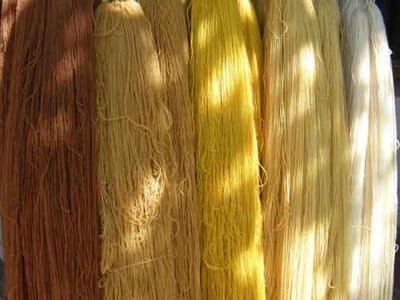 I have heard it said that if the onion skins are kept too long they don't dye so well, but I haven't ...

Harvesting the Madder in the Natural Dye Garden

After four years of tending and weeding, the time has finally arrived to harvest the first madder root from the dye garden. Due to the wet autumn it has been difficult to judge the right time to harvest, as the foliage is still green and there are new root shoots. However the arrival of my brother-in-law on holiday heralded that the time was ripe, and with his help we harvested the madder patch.

Each day we dug out a few kilos of madder roots and he washed them before drying. As the week went on he perfected a washing method ...

The first weld plants are beginning to ripen. Here is a picture of some hanging up to dry. 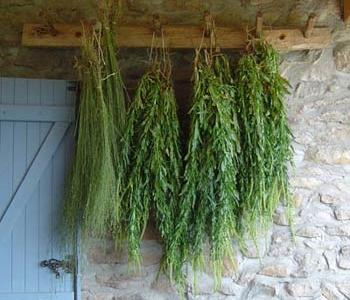 Weld is the plant on the right, the other is flax for linen thread. Flax is growing like a weed in the hay pastures this year, where last year there was none. The shutter by the way is painted with woad.

The weld plant is ready for harvest just before the flower shoot really gets going. Here the buds are still tight and the plant is still relatively compact, if left to grow they would probably have shot another foot or so ...

This madder is only a few months old, in 2-3 years it will have covered all the ground and the roots will be ready to harvest that Autumn.

Madder seems to grow well in this area of France, where the summers are hot but not too dry. There has been a recent attempt to grow it in Provence which was abandoned, I think because of lack of water. 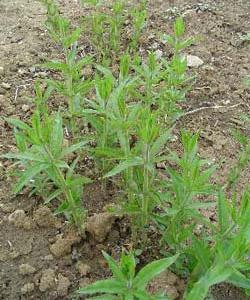 However in Holland where madder was grown traditionally, a new company was launched last month called Rubia. If you are looking for madder extract it is worth looking at their site.

Red Sorghum as a dye

Sorghum was one of the dye plants I grew last year. It grew very well on our dry southern slope. One night the wild boar came to invest it and pulled some down.

They neither ate it or returned, no doubt knowing at the first sniff that it is poisonous. Unfortunately, this year I didn't have time to work with this fascinating plant, but I have kept some seed and plan to sew it this year as a combined dye crop, shade and wind break. It is very drought resistant, its leaves contract around the stem conserving moisture as ...